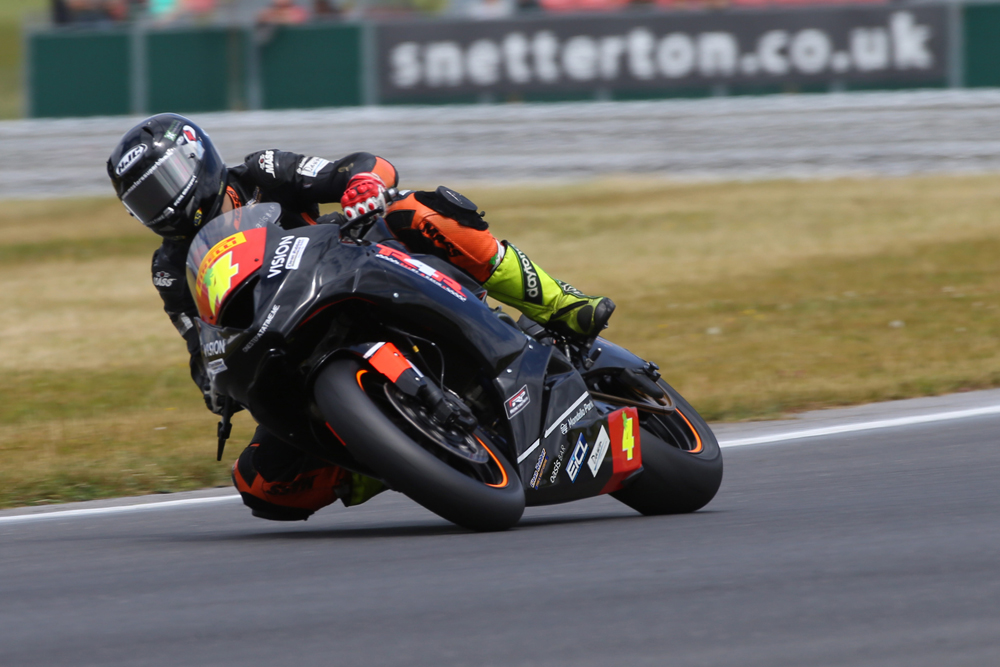 Irish Motorcycle Racing stars Caolán and Rhys Irwin once again proved their ability with strong but very different performances at the latest rounds of the British Superbike Championship at Snetterton, Norfolk, on Saturday and Sunday July 20th and 21st. Rhys was back in British Talent Cup action while Caolán was running in the British National Superstock 600 class.

The Donegal youngsters had another positive weekend with Caolán just missing out on a podium in the Superstock class while Rhys showed his ability to overcome a set back with two strong fightbacks from last on the grid following a qualifying crash.

Having made his debut in the Superstock 600 championship at Knockhill two weeks previously, Rhys was back in British Talent Cup action once again at Snetterton. Having started steadily in practice the Donegal teenager was ready to challenge for the top spot in qualifying and set the fastest time of the session on his fifth lap. Unfortunately he then crashed out on lap six and as the track dried all of his rivals went quicker to leave him on the back row of the grid for both races.

A strong run in Saturday’s race one saw Rhys run as high as eleventh but he then dropped back to finish thirteenth as his set up did not suit the drying track. Race two went much better as the Irish rider climbed to seventh place at the flag just failing to catch the group battling for third place. Two more points scoring finishes mean that Rhys heads for the final two events, which support the Czech and British MotoGP rounds, with a chance of taking third in the Talent Cup championship.

Speaking after race two, Rhys said, “I really made it hard for myself with my crash in Qualifying. I was left having to start from the back of the grid with a limited chance to adapt the bike to the conditions, but I was happy with the speed I showed and the number of places I made up, particularly in the second race. We’re off to Brno next as a support to MotoGP and I’m aiming to impress there and hopefully move myself into contention for a top three finish to the championship.”

Caolán Irwin continued his progress in the Superstock 600 class as he achieved his best qualifying position of the season to line up on the front row of the grid for the first time. A steady start to the single championship round put the Donegal rider in third place on his Ready4Racing Kawasaki and he remained in the thick of the battle throughout.

Moving up to second at half distance Caolán held the runner-up spot going onto the final lap but was pushed wide by an overtaking move by the third placed rider leading to him dropping two places to finish fourth, just shy of his second podium of the season.

“I cant believe I’m disappointed with a fourth placed finish” was Caolán’s reaction after the race. “earlier this season I’d have taken it if you’d offered me a fourth place finish before any of my races, but now its a measure of the progress that we’ve made that’s it’s a disappointing not to make the podium. I have to thank the team for all the hard work they’ve put in and for their faith in me when things weren’t going so well. I also have to thank all of my sponsors especially Wesley of Clean Rubber, Oasis Bar, PCRS Bikesport and everyone else who helps me out.”

The Irwin Racing brothers will both be back in action over the first weekend in August with Caolán in Superstock action at Thruxton, UK and Rhys on British Talent Cup duty in Brno in the Czech Republic.