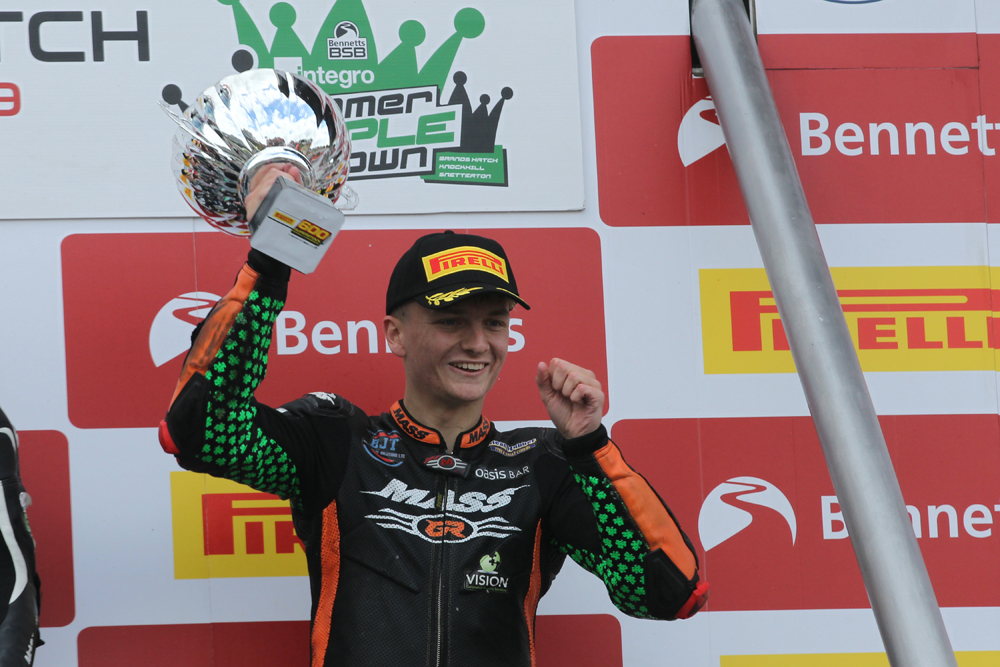 Donegal based Irwin Racing took another haul of strong results, as they returned to British Superbike Championship action at Brands Hatch this weekend, June 15th and 16th. Both Rhys and Caolán Irwin took their best results of the season so far with Rhys picking up a pair of fourth places and Caolán claiming his first podium finish of the year.

Having competed in the British Talent Cup at the last BSB event, Rhys returned to the Moto3 Standard class this weekend, riding his Motorcycling Ireland backed Honda. A strong run in qualifying put him third on the grid for Saturday’s first of two races.

The first race of the weekend saw the seventeen year old get a good start to maintain his fourth place. Running with the leaders throughout, Rhys was frustrated in his efforts to move towards the front as he struggled for straight line speed, despite being quicker than his rivals through the corners. At the flag he was unable to overcome the speed deficit, but still had the satisfaction of picking up second fastest lap of the race and second on the grid for Sunday’s race two.

Another good start for Sunday’s race moved the Kilmacrennan racer up to second in the early laps, in a tight group fighting over the podium positions. Once again his straight line speed troubles intervened to leave him just shy of the podium at the finish, but he still achieved his best weekend of the season so far with two fourth place results.

Speaking after the race Rhys was happy with his performance and the fact that he was now just one point off third place in the championship “We have to happy with the weekend’s results considering the way my size and weight, compared to the other riders, leaves me struggling for straight line speed. I was all over them in the corners so I know that I would have the ability to beat them if all things were equal. I took another good points haul and I’m now closer to third in the championship than I was at the start of the weekend, so I have to thank all of the team for their efforts over the weekend. Next up is Knockhill where straight line speed is less of an issue so my aim will be to get on the podium there.”

While Rhys had two races to contest, older brother Caolán had just the one Superstock 600 race at Brands, on Sunday. Qualifying went well as the team continued to improve their new Kawasaki and Caolán picked up his best starting position since Silverstone’s round one, with sixth fastest time. Qualifying had taken place in the dry on Saturday but come Sunday morning the riders were greeted by changeable conditions and the team had to make a major set up change to allow for the soaked track.

When the lights went green Caolán was instantly on the attack moving up to fourth place. A string of impressive laps saw him quickly move past his rivals and by the end of lap four he was leading a BSB race for the first time. The battle for the lead was now down to three riders who were well clear of the field and with two laps to go Caolán was confident he could take the win, despite the conditions worsening. As he pushed for the top spot a major slide made him rethink his strategy and he decided to settle for third and his first podium finish of the season.

“I’m delighted to get back to the podium”, said Caolán after the race. “The conditions were dreadful but the bike was really well set up so I was able to push hard for the win. I have to thank Philip Case of PCRS Bikesport for his part in getting the new Ohlins suspension sorted out and enabling us to make the progress we have. Ready 4 Racing have done a great job on sorting the bike for me so I decided to settle for third in the final couple of laps as the team really deserve to get a podium finish considering the start to the season that we’ve had. I’d like to thank all of the lads on my side of the garage for their help this weekend, Wesley, Gino, Elliott and Brad and of course my Dad, Ivan.”

Irwin Racing will be back in British Championship action at Knockill, Scotland, in two weeks time.